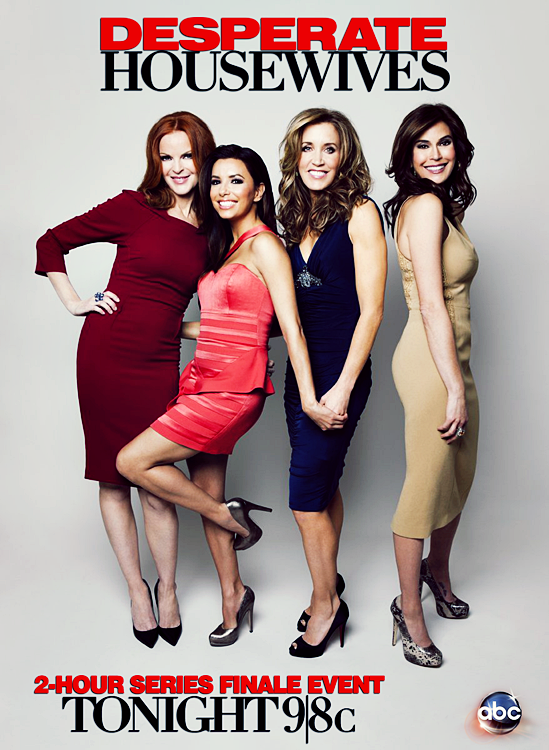 In October of
2013, I began to browse the library of boxsets available on the Lovefilm, a
popular downloadable and rental service, equipped with films and television
series boxsets. The service enables subscribers to rent or stream content
through the post, their smart televisions, smart phones, tablets and computers.

Through this
service, I decided to watch the award winning and incredibly popular mystery
drama series, “Desperate housewives” which ran its course from 2004-2012. This
series, hooked the majority of my friends and family at the course of its
running, so of course I want to see what the hype was. The series follows a
group of 4 housewives; Bree Vande-kamp played by Marcia Cross, Gabrielle Solis
played by Eva Longoria, Susan Myer played by Teri Hatcher and finally Lynette
Scavos played by Felicity Huffman who live on a fantasy street; “Wisteria Lane”
America, in Fairview. The housewives lives, are narrated by Mary Alice Young,
played by Brenda Strong who shoots herself in the pilot episode. The show, ran eight
series, in each series sees the housewives subjected to a new neighbour who
holds a dark secret which jeopardises the entire lanes safety and wellbeing.

In Series 1,
the viewers are introduced to all 5 original housewives, including Mary Alice,
who in the pilot episode, firstly tells us about her morning routine, in this
happy and content routine she picks up a gun and shoots herself in the head,
after receiving a note reading “I know what you did and makes it me sick”. This
note is the centre of the first series’ mystery because the audience are
clueless into what she did whats sickening, neither do her best-friends, the remaining
4 housewives. This first series, is essentially the writer, Marc Cherry,
telling the audience about each of the housewives lives and how it has made
them today, it all contains sex and violence.

From my
personal opinion, out of all 8 series, I believe that Series 2, 3, 7, 8 are the
best, because they have a genuine mystery from the minute you say go and it
runs to the very end rather than finishing half way through.

Additionally,
I believe that Bree, had the most gripping storylines out of the four
housewives. In the first series, Bree is presented as the perfect, housewife
with the perfect family, however her husband, Rex, asks for a divorce, she begs
for forgiveness, resulting in them seeking marriage guidance. However, later
on, Bree discovers her husband was seeking sex from a known, rich, housewife,
prostitute Maisy Gibbons who meets his sexual needs that Bree is failing to
deliver to him. This affair is revealed when Rex suffers a heart attack whilst
with the prostitute. In revenge, Bree begins having an affair under Rex’s nose
with their chemist, George Williams. However the affair ends, after just two
episodes of dates, due to Rex asking for forgiveness. Whilst her marriage is
under scrutiny from the lane, her two children, Danielle and Andrew also seek
to cause trouble; Andrew for example, comes out as gay which disgusts Bree, due
to her conservative and Christian beliefs. To fury Bree, Andrew begins to
involve himself with gangs and criminals, this leads to him being drunk and
killing Juniata Solis, Carlos’s Mother, unknown to him. Bree’s ex- lover,
George, begins to swap Rex’s medication with an alternative and life threatening
medication which he knows will eventually kill Rex if he takes enough.  This is all unknown to Bree, who sees him as
an honest and trustworthy man. Eventually, Rex dies from a heart attack which
was caused by Georges swapping. The last scenes, show Bree breaking down having
heard the news about her husband’s death.

Within 5 episodes into Series 2, Bree
begins officially dating George Williams, but this is soon tainted by her being
the suspect in Rex’s death as a result of Rex’s Mother suggesting to the
authorities that it was Bree, who poisoned him. This is resolved after an
episode and a half, but later on George’s ex-girlfriend comes to visit Bree,
demanding that she listen to her about Georges true personality, as a stalker, she
doesn’t believe him. Until, he proposes to her in front of his family. When she
turns the offer down, and ends the relationship, George begins to heavily stalk
Bree, which scares her, to show that he isn’t, he invites her to dinner but in
fact he is intending to commit suicide, unless she comes to his rescue. She fails
to do so, killing him off. Towards the end of this series, the audience, see
her life transcending into a disaster, she disowns her son, Andrew by dumping
him in the middle of no -where. During this difficult time, she turns to alcohol,
despite her friends and families best efforts this is no good. She hits rock
bottom, where she eventually sends herself to rehab, where she meets Orson
Hodge, her soon to be husband.

The third series, is the best, because we see
Bree finally getting out of this conservative character. She marries, Orson,
who unknown to her has a dark secret. He firstly, ran over Mike Delphino, Susan’s
soon to be husband resulting in series 3 seeing him mainly in a coma. Then, he
has a deserted wife, Alma, a mentally ill lady, who is introduced in the very
first episode, she runs away but the audience is led to believe that he has murdered
her, which taunts him until the middle of the series where it is finally
revealed that he never killed anybody, but his Mother did kill his ex-mistress
Monique which ended his marriage with Alma. Alma torments, Bree and Orson’s
marriage until both Bree and Orson declare their love for each other. Series 3
ends, with Bree and Orson leaving for their honeymoon, until they see Andrew on
the news declaring suffering and suggesting that Bree is a terrible Mother.
Bree feels guilty and goes and rescues him, Orson too reconciles him, telling
him that his Mother has now changed after meeting him. In Series 4, Bree
returns to the lane, pregnant, the audience and the other housewives believe
that Bree and Orson are expecting but instead, Bree is later pretending to be
pregnant to cover up her daughter’s pregnancy where she is being hidden in
Europe. Daniele finally returns, having the baby, where Orson and Bree claim
the baby to be there’s. Series 4, ends with a tornado, but series 5 begins 5
years later, where Bree is now a successful businesswomen, Orson has returned
from prison, having declared his guilt for Mike’s hit and run. From here to the
end of series 6, their marriage is up and down, as a result of Bree beginning
to have an affair with Susan’s ex-husband Karl Myer, a divorce lawyer who she
meets whilst trying to divorce Orson. Orson is completely out of the equation
in the middle of series 8, but torments Bree continuously. Series 8, sees Bree
being on trial for murder. The end of series 8, ends with all four housewives
leaving the lane, Bree leaves and falls for her lawyer Trip Weston. The pair
move to Texas, where Bree becomes local president. As you can see, Bree has the
most destructive storylines, because they are relatable and realistic unlike
the other housewives. She also has funny and memorable lines which other
characters sometimes do not always have.

On 29/03/14, I
completed my fast track of Desperate Housewives, It was so hard, because I
loved it, but it’s good to finally end it because I can now find another
series. I fully recommend, this series despite most seeing this series, if you
can, just watch a series, it is also on Sky on demand up until May 31. So go
and visit Wisteria Lane, I can guarantee that you  won’t want to say goodbye to it. 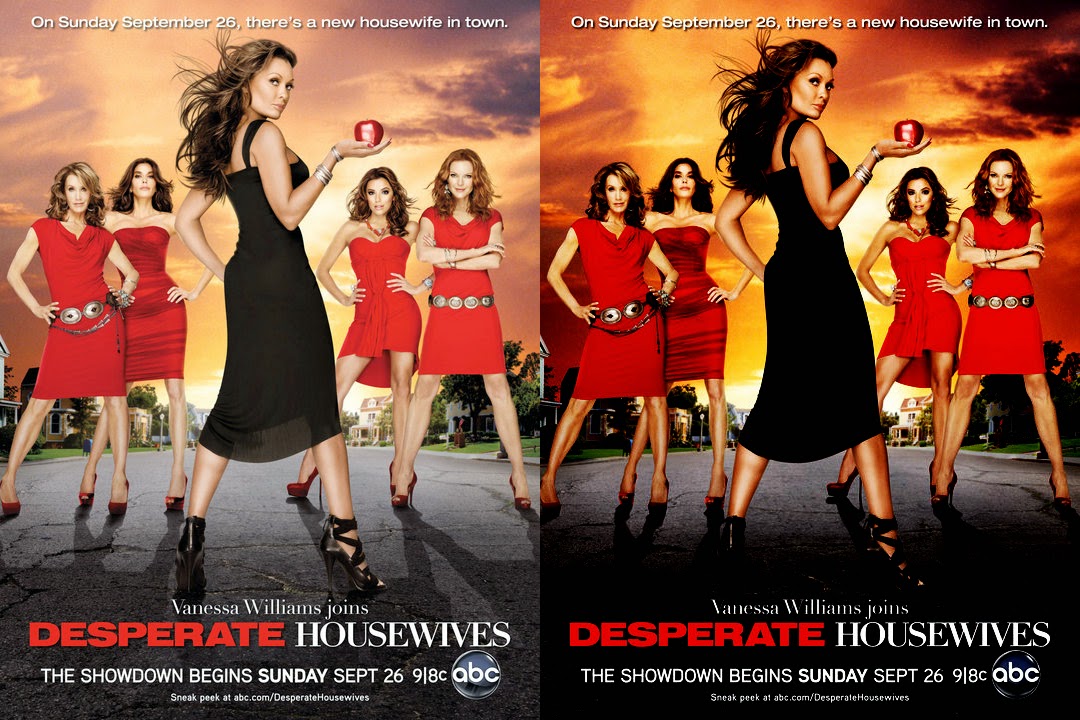