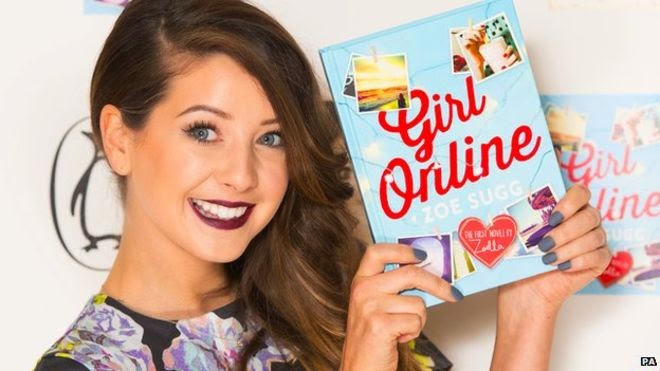 I try to stick to what appears to be my readers favourites posts but today I wanted to write something about the recent issue surrounding, the popular Vlogger, ‘Zoella’ and her new book ‘Girl Online’.

I will openly confess it to anyone who asks me about ‘Zoella’ or ‘Zoe Sugg’, that I admire her, for her achievements not only as a female but also as a blogger. I honestly think that anyone who can start from the bottom and work their way up to the top needs to be recognised for their hard work. Also she was my inspiration for writing this so, thank you Zoe!

The issue with Zoella started after her new book ‘Girl Online’ was released on the 25th November and its record sales in its first week, beating many authors of the fictional genre alike. But within weeks, the typical British media and public began their scrutiny of Zoella’s craft, the question with it all, was, did she even write the book? Or was it Ghost written?

For readers who are not aware, the term ‘Ghost written’ simply means that ‘somebody else is credited to writing for somebody else’. Katie Price for example, claims frequently that she has all her novels written by somebody else, she just comes up with the initial ideas for the plot.

Back to Zoella, what I find annoying about the whole situation is, is that we cant just accept that in this modern day age, many of our popular authors and personalities are going to have some sort of help from a professional in making their dreams a reality. In Zoe’s case, she is a new writer entering a competitive world, therefore will have some sort of help from professionals. To please certain scrutinising individuals, she has already declared via Twitter that she did have help in the writing but she did create the characters, plot and initial ideas. So basically it was similar to Katie Price’s situation.

Am I annoyed with Zoe for this? No, why would I? Firstly, I have no intention on reading the novel not because I dislike the writer or do not consider it to be literature, but rather because I do not like the idea of the plot, I much prefer a gritty old school text in favour of new teen flick style novels. In the same way, why should we really be so angry about it, because at the end of the day, she is new to the writing field, yes she writes a blog but the blog is a page not a  300 page book, therefore there is a slight contrast. The opinionated Katie Hopkins has already declared her frustration over the matter but why? Come on people there are much more serious issues to be frustrated over then a silly book? It is hardly the memoirs of Gordon Brown or Tony Blair revealing top secret or even confidential issues of the country, its teen fiction, must we?

I completely understand the frustration, and I do have to confess that it would have been much better for Zoe to admit from the beginning of the writing process that it would be written by somebody else but it would be coming from her ideas and her thoughts and therefore hers. Perhaps would we be in less anger if she had confessed this? Much to the disappointment of her fans and viewers she took some time from the inter-web to focus on her relationship with fellow v-logger, Alfie Deyes, but does appear to be back on the inter-web now so that has made my friends and I very happy as I am in need of some new make up tips.

Dear Zoella and the future writers of my generation,

If you intend on having one of your books, Ghost written, go ahead if it helps you both with your other work and professional development but do admit in the beginning as we don’t mind we just want to know, but it also gives credit to the person who has written it for you!

PS. Zoella keep making vlogs and writing blogs, I enjoy reading and watching your life, let me have your life!