If you are an avid reader, by this I mean you click on the
link I share on social media to share with you a new post not just to read it if
there is me standing in a bikini. By being an avid reader you would know that
the majority of my blog features my likes, and the things that bug me enough to
write more than 140 characters about them. Today because I can get more than
140 characters out of the topic, I will tell you bring you up to date with the
latest Clarkson news and tell you why Amazon Prime is the way forward for your
streaming delights.

Unless you have been living under a rock for the past 4
months, you would know the J. Clarkson escapade that has seen him lose his beloved
presenting role on the worldwide show, Top Gear after a fracas with a producer.
I know ‘fracas’ will be my word of the year? Is it yours? Since the absence of
contracts being offered of the presenter, newspapers have speculated for weeks
on many things starting with who would replace him, Chris Evans becoming the replacement
despite refusing to take his job. Hypocrite of the year award to Chris Evans,
if such a thing was invented. Next question was, whether this co-hosts May and
Hammond would follow alongside him, they did after refusing a £4.6 million deal
to remain on the show alongside Evans. The final 2 questions now remained
unanswered who sign the trio? Would they even be signed? And would the brains
behind Top Gear’s success, Andy Willman follow suit?  Within weeks of Clarkson’s sacking, Willman
resigned as executive producer, being quoted saying ‘the BBC have made a
mistake with Clarkson’. I with millions of others, agree.

It took 4 months; finally yesterday the trio confirmed or
announced, that Amazon Prime had signed them for a whopping £160 million. This
contract with the millions included 3 series at the platform of streaming. When
I first heard the news, I was delighted because I am lucky enough to have both
Netflix and Amazon prime, I thank Pete the cheat and my Mums partner for that
luck; so whether they went to either streaming providers, I would be able to
watch them. Since the news many have asked me for my opinion as though I am
their spokesperson or a media analysis; so here it is.

To avoid becoming boring like the Daily Mail, who write
articles that should be given to a GCSE English group to proof read. Amazon
Prime have only just become a part of the big streaming market over the past
year I would say. In the past year the service have produced 3 of their own
series which have received awards. They also bought back Ripper Street which
was axed by the BBC, another mistake. Amazon currently offer their streaming
service for £5.99 a month, the same as Netflix, I add! The service also
includes, unlimited next day delivery which for me as a forgetful person is
such a good deal because the times I have forgotten about a person’s birthday;
needed to order a present to arrive the next day is unlimited like the service.
Prime also includes a Spotify type service to stream music. Amazon haven’t
isolated young people like the Tory Government, they put in a student deal
where you pay £39 a year rather than the adult £79. This sounds such a lot of
money if you would only be signing up to the service for the trio, I completely
understand  but before you say no
forever, you should consider the shows and films streamed on the service. For
example I re-watch the Desperate Housewives series, because I could watch Bree
Vandikamps mistakes with men hundreds of times. Amazon also have Scandal,
another favourite of mine. For you Sky subscribers, most of the shows in their
boxset collection are on Amazon Prime which is perfect. I should also warn you
that, Netflix does provide a load more TV series than Amazon, I believe that
Amazon need to get a move on with adding programme’s and films on their
streaming service. This limitation in their service has seen me clicking on a
film with a £1.88 rental tag which is ridiculous. However as my family know,
for me to watch Hammond, I would pay that, seriously I would.

I think the
announcement has shocked a lot people as the papers had suggested that Netflix
were the front runners in signing the motoring trio. The Daily Mail have
suggested they have ‘sparked fury’ as usual, they haven’t I just believe a lot
of people were hoping for Netflix so they would have it already. Signing with a
company like Amazon prime means that the trio will not be in ratings wars like
the new Top Gear with Chris Evans or if they had gone to rivals, ITV; Neither
will they have advertising to consider, with ITV or Channel 4 they would have
required advertising which becomes problematic for the trio and their track
records for offending. Clarkson was also quoted in his Sun column today saying
that the site are giving them free reign to create the show without interfering
which Willman claimed the BBC did. The presenters have made points suggesting that
whilst working on Top Gear for the BBC, the management above them had often
suggested ways of improving the show, such as replacing Hammond or May with a
female or a person of ethnicity. For somebody who enjoys the trio cocking
about, this suggests that other cocking about segments were cut out to avoid
being politically un-correct.

3 things I want this new show to have

1-
Feature
length specials– year after year the trio clocked in ratings beating much
of their rivals on fellow channels, bringing in a lot of revenue for the BBC in
DVD sales. These specials were the highlight for my Christmas’. These specials
though should be unscripted, I felt the last one, featuring Patagonia felt far
too scripted, losing the genuine humour between the trio.

2-
Cheap Car
and creating challenges– these challenges should include the trio buying a
car, making it into something or just have challenges again, these were the
highlight of every series and genuinely funny.

3-
An
Audience– I was lucky enough to attend a filming for the last series, I had
the best time, standing metres away from my desired future husband, Hammond.
Top Gear became the most highly requested show to watch which means for the
trio they would make a lot of people who didn’t see it previously to see it
production. The audience were a big part of Clarkson’s amusing comments often
calling an audience member Jesus due to arriving to the studio with long hair,
a beard and sandals such comments made for entertaining television. This went missing
in the final episode which had no audience and no Clarkson. 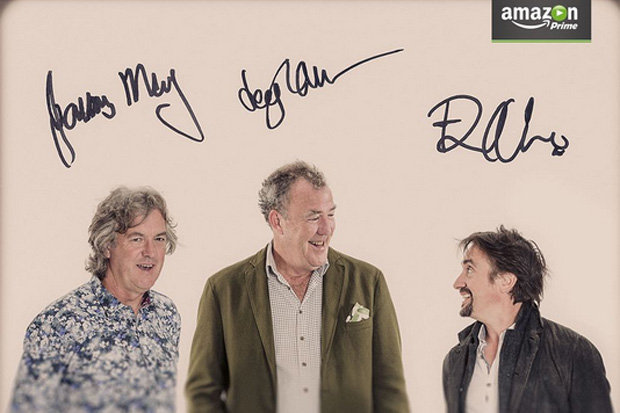