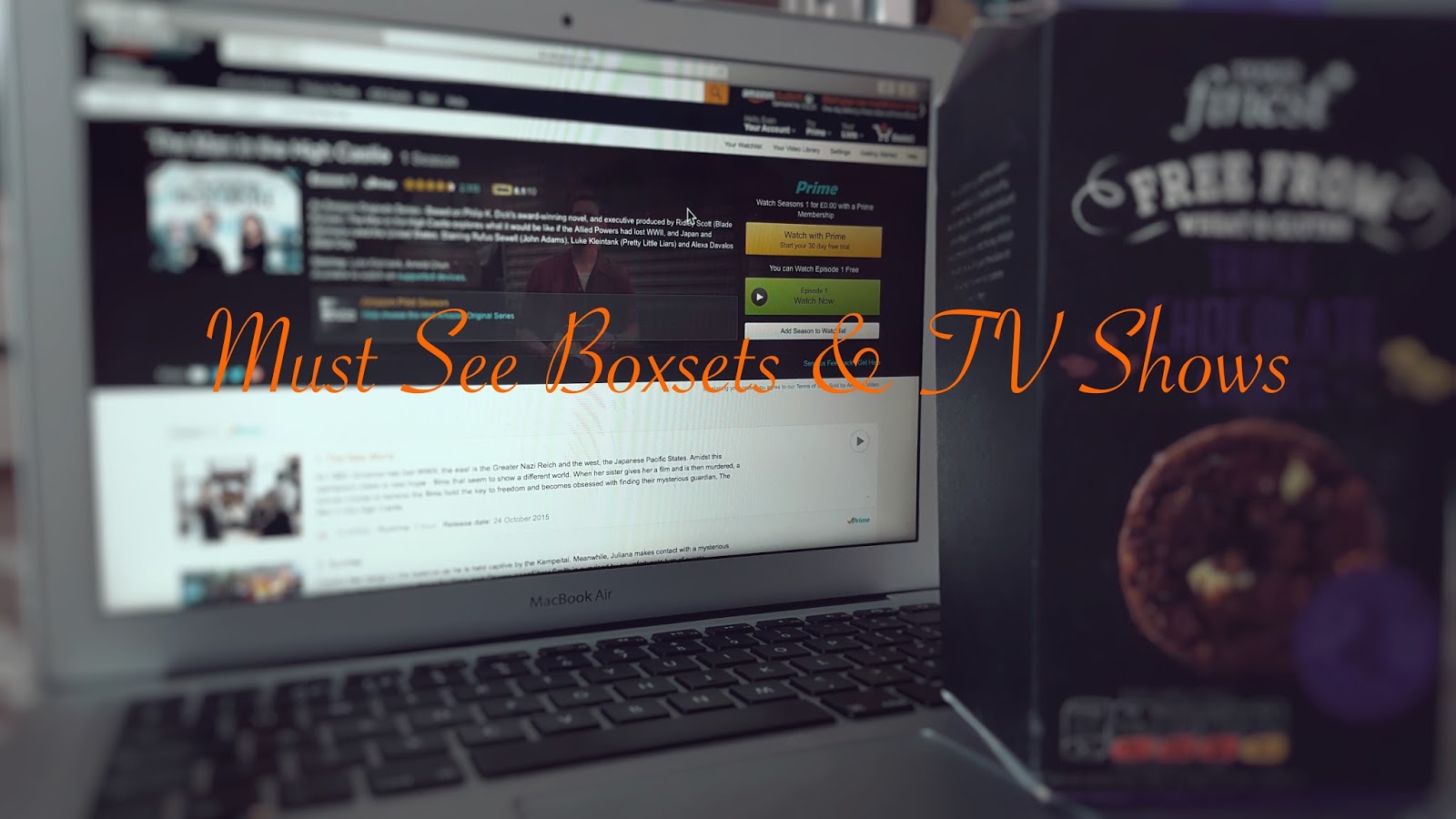 With most of us now owning either a Netflix or Amazon Instant Video account now a days it’s no surprise why so many of us spend our evenings streaming instead of going out. For a monthly subscription one can lay in her own bed with a bottle of something alcoholic or non alcoholic and indulge in a boxset she has viewed multiple times or one she has been recommended. I to most people am a boxset binger because if you recommend something to me I will watch it and if I like it I usually finish it within a week. I think this is a CV worthy talent too. So many people ask what they should watch so I thought I would recommend a few I think you should watch and are available via; Amazon Prime, Netflix and Sky.

Amazon Prime Instant Video: The Man in the High Castle

You’ve been living on Mars if you were not aware of Amazon’s launch into the video streaming world and like Netflix they too have released their own range of shows exclusive to Amazon. I have been a user of Instant video for a while and I’ll be honest their range of shows are very limited and this is why I am delighted Jeremy Clarkson signed with them because he will add more flavour to their current range of shows available to stream. Whilst bored in the cold gloomy month of January, I became obsessed with their show The Man in the High Castle; this had been advertised on TV for ages and I had always put it on my ‘must watch list’ if that was ever such a thing. The show is based on the book written by Philip K Dick and presents America as though Nazi Germany and Japan had won the Second World War. I would highly recommend this to anyone in need of a new show to watch because as well as being highly gripping throughout for its main plot, it is just brilliantly directed and plotted. I was most disappointed when I got to the end of the series after 10 episodes but not to worry my chums because Amazon has re-commissioned it for another series.

This show my Mum recommended to me after she saw it advertised on the Sky channels. It has only just launched in the UK and already has caught my attention for being a truly gripping show. The show produced by Shonda Rhimes- the God Mother of good television. Tells the story of a woman who discovers the man she has been engaged to, is in fact a con-man and has been conning her for the entire time. She as a private investigator was absolutely clueless about the whole situation and the series sets out to get answers. It is very gripping and highly addictive. Along the way there is focus on the clients she investigates in her career. If you liked Doctor Forster then I think this would be right up your street.

This show is my absolute fave, it is just incredible and has been from its first season. It follows the life of Olivia Pope a political and celebrity fixer who has been having an affair with the President of the United States. In the first and second series there is a strong emphasis on Pope’s business ‘Pope and Associates’ a firm fixing celebrity and political problems in Washington. Each character in the series has their own problems of which Olivia has fixed or helped them through. In the third, fourth and fifth seasons the problems Olivia deals with are career and personal. I think my favourite things about this series is Shonda Rhimes’ ability to bring in contemporary issues into the series whether problems to do with race, gun violence and gender issues. The issues are always discussed and really do bring into the limelight their involvement in society. Similarly the characters relationships will pull at your heart strings and make you become attached to them and their relationships with each other. I also adore the 70s soul soundtrack which sits behind poignant or big parts of the series. Highly addictive viewing and available on Sky Boxsets at the moment.

This series I mentioned in my May favourites and want to mention it in this post because I would highly suggest that you find it online or download the episodes on Sky because it is brilliant. The series follows the life of Alex Parrish a trainee FBI agent at Quantico and her colleagues. The series deals with the past and future. In the past we’re viewing the training of the FBI agents but in the future we are seeing Alex being framed for a terrorist attack in New York which has killed thousands of Americans. At one point you honestly do think Alex is behind the attack because all the evidence points to her but it is somebody closer to home who she actually trusts. This show leaves you in suspense and is very addictive. I began watching it on Sky but when I could no longer wait a week in-between episodes I began streaming it online because it was too addictive.

I was recommended this series by my parents who said I would find it addictive and boy were they  correct. This series has James Franco which is instantly a reason to watch the series because why wouldn’t you want to watch it with him in it? Franco is essentially sent into the past specifically the year 1963 to help stop the shooting of President Kennedy. The series is 8 episodes long and is very addictive and gripping like most of my recommendations.

This series was a series which got me through my A Levels because my business teachers at the time always recommending me take time out for myself and watching this was one of their suggestions. The series follows the life of lawyer Alicia Florrick who is returning to work after her State Attorney husband has been caught in a sex scandal. She must enter the new modern law world whilst dealing with her personal life becoming public for the nation. The first 6 seasons are available on UK Netflix and if you haven’t begun streaming you need to because this is steamy, gritty and just too good. Go for it!!

This series is for everyone who is sick of viewing politics as just a boring game because this show makes fun of politics and follows the Vice President Selena Myer who is campaigning for Presidency. In each season we follow a campaign or her in the office of presidency whether as president of just standing in. This show is very funny but not rudely funny just sarcastic. If you like the humour of Parks and Recreation and the humour in We are the Millers then this comedy would right up your street.

What I love about all of these shows I have suggested to you feature a strong feisty woman which is what I admire and aim to be in life.

When you click the titles of these shows you will be directed to their trailers which I think you’ll find most helpful when deciding which one will be your next viewing!