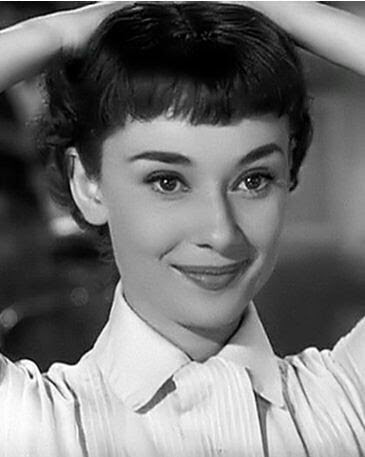 Back in 2014 I dressed up as Audrey Hepburn in her well known role in Breakfast at Tiffany’s and I even wrote a blog post then before my blog was a firm part of my life. Then last year I dressed up as Audrey again for another fancy dress party but never even featured  a blog post on the dress up. It was always in my drafts but annoyingly I never published the post. I now want to post it because I never got to share with my readers how and what products I used for the look. Fancy dress is hard but I absolutely love it as a theme for parties because it gets everyone very creative. We have to think outside the box and be different though my biggest fear at any party is, is being the same as someone else. I opted for a different Audrey for this reason because I know so many people who admire and adore the photography and filmography in Breakfast at Tiffany’s. For such a reason I selected Roman Holiday or as many people say to me the Galaxy advert. I spent most of that evening and time afterwards telling people that I was the woman from the Galaxy chocolate advert to engage people with who I was supposed to be. 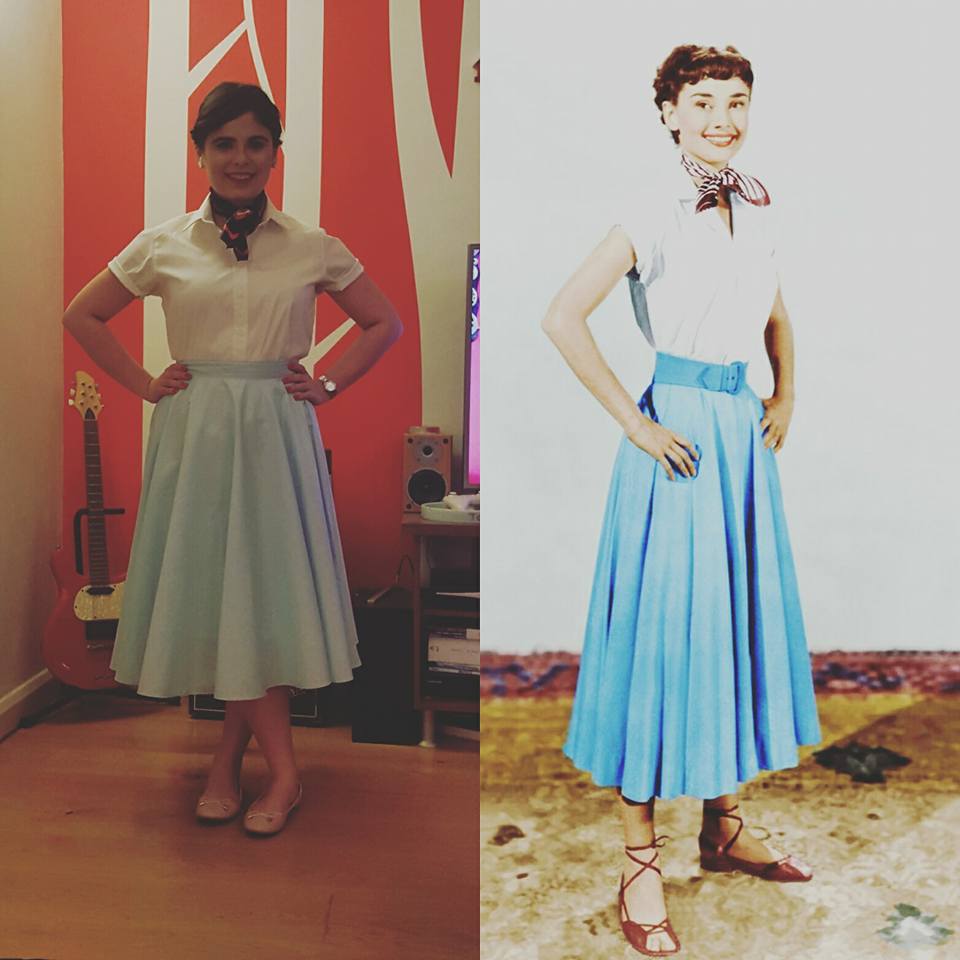 Amazon was my savour in this dress up as it is most fancy dress parties. Instead of googling Roman Holiday dress up I just googled images of Audrey Hepburn from the film and then went from there. The skirt, neckerchief and blouse all came from Amazon. I just googled 50’s pale blue skirt etc and these key terms brought up a great selection of Audrey Hepburn style dresses. My ballet pumps were from Dorthy Perkins. I will admit that Dorthy Perkins had at the time a great selection of ballet pumps so if you’re ever in need of a pair of flat shoes they would be first port of call. The shoes were comfortable for the most of part but towards the end became slightly sore on my feet but this is expected with new shoes. I have now worn these shoes in and am very impressed with their comfortability and am happy to wear them on matters outside of pretending to be Audrey Hepburn. 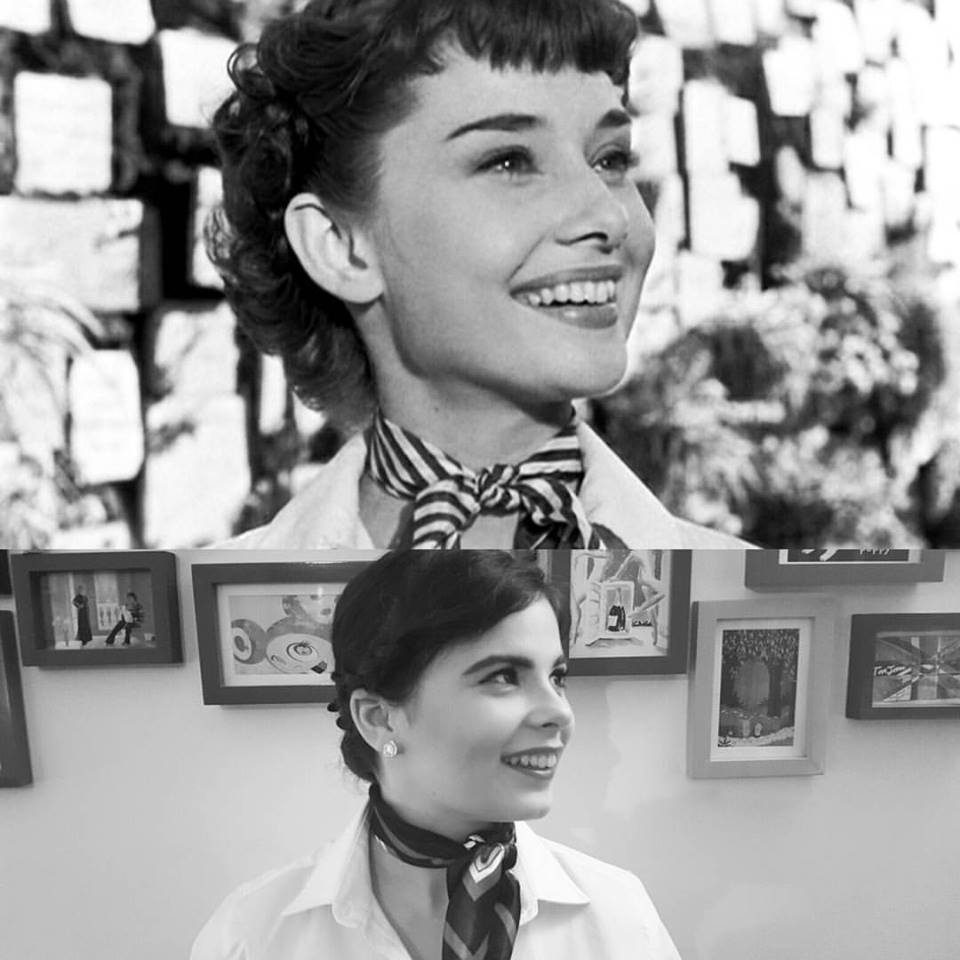 With my hair I am very fortunate enough to have my little Sister who although is not trained or training to work with hair she is amazing when it comes to recreating hair styles from pictures and films. I also have a Nan who is a hairdresser so both of these women combined meant I was in capable hands when it came to becoming Audrey’s hair double. First step, ensure your hair is a couple of days old because the hair style requires strength in the hair. Although clean hair is lovely, nobody wants their Hepburn style hair falling out towards the end of their evening out. So ensure this, to add more texture we applied Toni & Guy’s dry shampoo or their texturing spray which smells great and works brilliantly at adding in a bit of texture and grip to the hair. We then parted the hair leaving a few strands out because these strands would be later plaited as Audrey has hers plaited. So with the hair pieces you don’t plait create a saggy bun that has definition. I do not intend on going into naming hairstyles which is a relief because I am terrible at such a thing. The bun should be low in this style you want an elegant low chic style and then begin to plait the rest of the hair to sit on top of the bun and on the right hand side of your head. The plaits sit on the bun and create a rather chic look on the hair. 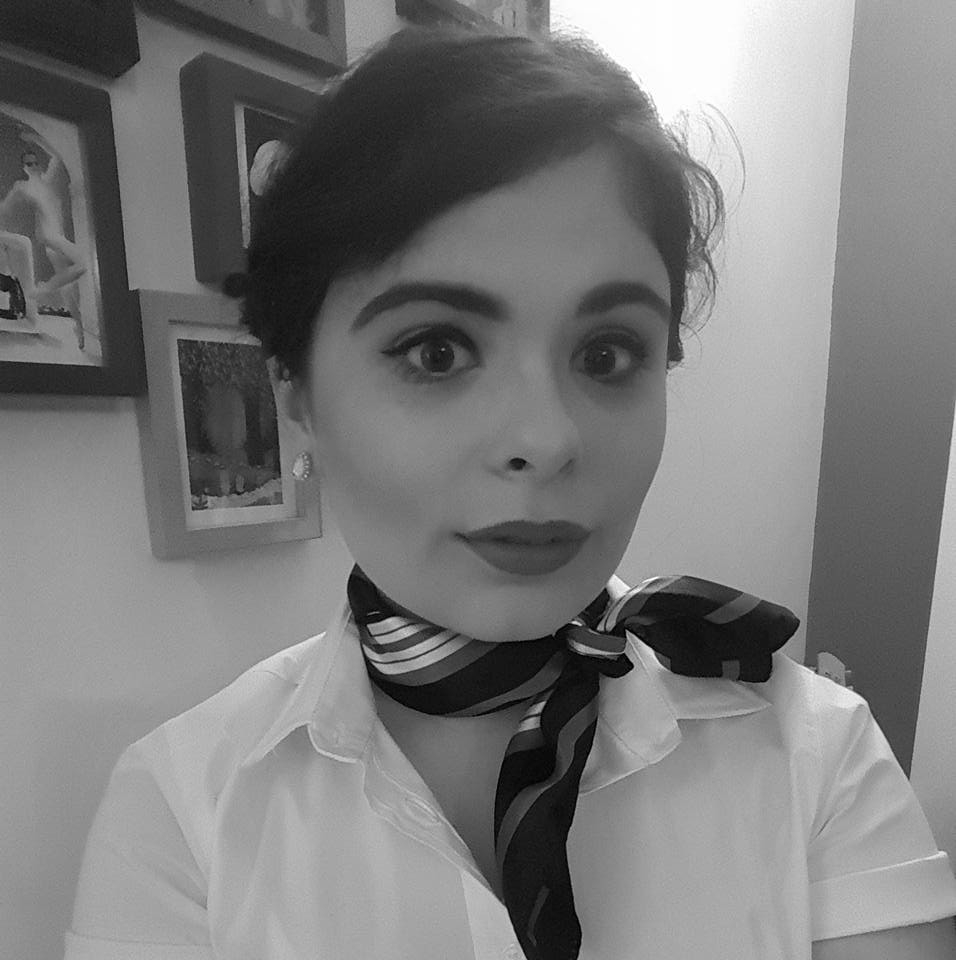 Audrey had flawless skin and I was lucky to also have blemish free skin that weekend so my base was really easy to work with. I wanted to create a fresh glow to the skin because the film was set in the Summer and she was on holiday so we didn’t want a dry matte look to the skin. I began by priming the skin with a moisturiser and this comes from Nivea I use a pea size amount just to rehydrate the skin. Then go in with the trusty Revlon Photo ready Primer and apply this all over the skin which primes and prepares the skin for heavy or just coverage. Once your priming products are set you want to do your eye make up first. This sounds ludicrous to some people but I always prepare my eyes first because I am so bad at making mistakes that I end up taking my base off in the process of making these mistakes. You want to firstly use an eyeshadow primer and this came from MUA which at £1.99 is a super dupe for the Urban Decay priming potion which at the time I did not have, unfortunately. After using this primer I went in with Maybeline’s fit me concealer in shade fair over the eye just to conceal any veins on my lids. This also prepares the eyes really well for any shadows or liners. Audrey had very defined sockets and to do this her artists would have used a taupe shade to blend her crease out I used the Urban Decay Gwen Stefani Palette and used the shade ‘1987’ and this has to be a matte shade to create the real definition Audrey had in these shots. Use a shadow brush to work this into the crease to create a beautiful contoured crease in the lid. You want this to look effortless and seamless which is done through lots of blending. Then lining. Lining is the tricky part for me and you I can imagine. To achieve Hepburn’s winged look I opt for L’Oreal’s Super liner in Black a must have eyeliner if you are in need of a good felt tip liner that removes the difficulty of lining your lids altogether. Such liners provide precision and reduce thick and uneven lines. 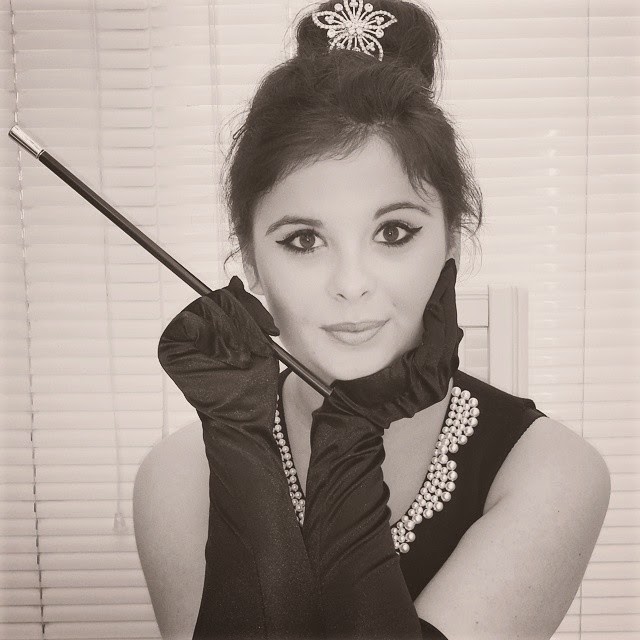 To complete the eyes I curl my eyelashes a fundamental stage of achieving full Hepburn style lashes. Hepburn has fluttery and volumed lashes which were created with careful preparation. One of these preps would have been through curling. So just to say this, remember girls curl those lashes. After this I used two mascaras, I know I rocked the boat out. This was because at the time I was a failure at applying false lashes and typically would end up throwing them in them into the bin beside my dressing table in anger and disgust. To create just as good lashes I opted for two good high end mascaras. I first went in with two coats of Benefit’s Roller-lash mascara which has the perfect brush for creating volume yet natural definition. The mascara does this in my opinion through its brush which is able to grab each tiny lash to create this natural volume. I then went in with its cousin mascara from the They are Real’ a mascara which goes for bold definition which was needed for going over the top of the lashes from roller lash. These two mascaras combined are great for finishing off and creating Audrey’s bold fluttery lashes. If you’re not at liberty to spend Benefit money I would advise going for the Essence False Lash mascara which in my opinion is a superb dupe for both Benefit mascaras and will achieve just as good results. Audrey’s eyes were top lash focused and she rarely wore mascara on her lower lash line so you want to apply all your mascara coats to your top lashes too. 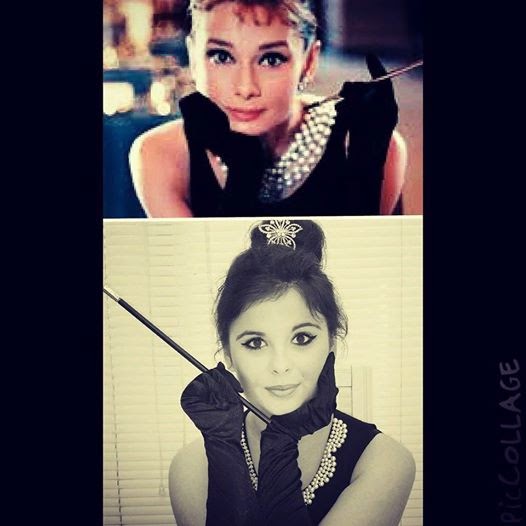 For the base which I hadn’t forgotten about you want to opt for a light coverage because Hepburn never went full on with her base make up. This is one of my reasons for her being a style icon because she didn’t rely on beauty products to enhance her already natural beauty. At the time I went for my trusted Benefit H20 flawless foundation. I am fully aware that every beauty related post I write I feature this foundation so it maybe worth me finding an alternative….but this foundation was perfect for this light look. I then used Maybeline’s Fit me Concealer again in ‘Fair’ and this placed under my eyes because Hepburn always had great highlighted under eyes and also around my lip line. Word of advice I am no make up artist however learnt this from one a show I watched. When wearing red lips always conceal your lip line because this will prevent your lipstick from bleeding and looking smudged and like the Joker. After this I powdered under my eyes with some setting powder. Setting powder is a must because I wanted durability in my make up so I used the Natural Collection Powder for underneath my eyes as this was the place in particular I wanted to maintain. You then want to contour and in these scenes Hepburn has contoured or gives the impression of being contoured due to her perfect cheek bones. To do this I used Benefit’s Hula Bronzer and used a contour brush to define those hidden cheekbones; adding that chiseled look Hepburn had in her filmography. You then want to highlight the cupids bow and cheekbones to do this use the a liquid highlight and powder highlight both from MUA in Pink Champagne a beautiful pink shimmery highlight which added a natural glisten to the cheek bones.

Now it comes to my favourite part of the entire look. The lips. The lips are the part which I loved the most because it meant I could wear a red lip a contrast from the previous dress up which was a simple nude lip. I chose to line my lips with the L’Oreal ‘Perfect Red’ liner and lined lips into creating a sweetheart lip centre to mirror Audrey’s lip line. I will confess to saying that this lip liner was rather poor at creating a defined line around my lips which was a shame because I was expecting high results for it coming from the Colour Riche range. If I were to re-create any red lip look again I would be opting for the liner from the Essence lip liner range because their crayon lip liners are much stronger in pigmentation a vital factor for creating a staple red shade. I then wore the corresponding lip stick which unlike its liner is superb. I still use this lipstick on a regular basis for its great colour, lasting power and just ease of application. I also love the packaging for the colour riche range. This red is Julianna’s and matched perfectly with the filmography shots I found of Audrey in the role in The Roman Holiday and in the galaxy advert. I filled in my lips with the lipstick and it matched perfectly with the eyes.