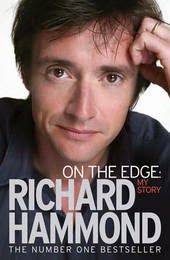 As my friends, followers and readers will know I do quite
fancy the Top Gear presenter, Richard Hammond (RH), I would call it a teenage crush
due to it lasting for all of my secondary school years. *Oops*. Still to this
day, I couldn’t tell you what it was that floated my teenage eyes 8 years ago.

*Insert biographical extract here*: Richard Hammond was an adrenalin junkie long
before joining Top Gear. From the small boy showing off his bicycle stunts to
the adolescent with a near-obsessive attraction to speed, he then worked in
local radio before graduating to television. It was while filming for Top Gear,
driving a jet-powered dragster on 20/09/06 at speeds of over 300mph, that a
tyre burst and the car crashed leaving him hovering near death with a serious
brain injury.

I have owned “On the Edge” for 7 years, since its release in
2007, but up until this very thundery evening have been yet to discuss it,
surprisingly I have decided to write about it now, just to get it off my chest
now because I don’t think my English literature teachers would appreciate it as
a work of literary art.  On The Edge is a
gripping account of his life before working in local radio and starting off in
the public eye in front of Top Gear audiences and after the accident. His wife
Mindy tells of the anxious hours and days of watching and waiting until he
finally emerged from the coma. She and Richard then piece together the stages
of his recovery as his shattered mind slowly reformed, culminating in Richard’s
return home and his triumphant reappearance in front of the cameras.

When it first came out, the reason for 90% of its sales was
to do with most readers whether male or female wanting to find out what it was
really like driving at 300mph, crashing at those speeds and then living to tell
the brutal story. So, like myself you read through the introductory chapters which
explain life before Top Gear, which included working on cable television and
local radio. Here we see that this adrenaline seeking was always inside and
when there was a risky job in the pipe line it was R who was prepared to do it
for the “buzz”. Then what most readers have been preparing themselves for, the
story that gripped the nation and kept newspapers outside a Leeds hospital
waiting for news, the 300mph crash. In these remaining chapters we as readers
learn many things the first is, is that Hammond actually brainstormed and
suggested the jet car idea, not the Top Gear team. Hammond recounts the memory
of the day’s events leading up to the actual crash, here we learn the enormity
of safety precautions that were taken despite many refusing to believe so. One
thing that I picked up whilst reading the chapters and elements that RH wrote
was that, the events leading up to the crash came across more like a timeline
then biographical meaning that sometimes you felt that you were reading an expert
report rather than just a writer. Nevertheless, it is still incredibly empowering,
in places leaving you thinking OMG due to this chapter being left on the last
sentence of “so this how my life ends”, it comes across more like a BBC drama
finale line when you re-read it.

Most would be led to believe that once the crash happens, we
fast forward 6 months and Hammond explains the recovery, but no this wouldn’t make
good publishing would it? To make it even more honest and emotional they bring
in the lady that stuck beside an ICU bedside etc for more than 5 weeks. The
lady that RH believes to be his “best-friend and soul mate”, quite a chick
flick line but I suppose that’s love. Mindy H first hears of her husband’s
shunt when in the process of riding her beloved horse, perhaps it is that makes
it even more heart breaking. For the remainder of the book, MH takes the lead
in the writing, her writing is much more fluent and less logical which makes it
far easier to follow due to its flow. It is in these parts that we learn some
real touching things; from the TV we could get the impression that Clarkson is
just a bombastic, right wing, petrol head but it is in this book how we learn
that like MH he spent quite a lot of time alongside this poorly friend, even to
this day saying “it was hard to see him like that”. We learn that he sent
amusing text messages to Mindy to keep her spirits up whilst RH was in ICU,
also that on one evening he sat waiting for RH to awake from a medical induced
coma to allow MH to catch some winks due to being awake for so long. In the
same way we learn that the executive producer Willman was also supportive in
some parts of the way shedding tears. Shocking really isn’t it? It’s true what
they say about the camera sometimes being misleading.
So to sum it up, i am biased due to believing that Hammond is
drop dead gorgeous and being quite upset during the initial days of RH’s hospital
time, to be professional. I will say two things, nobody could ever
criticise Mindy and Richard for lack of honesty because sometimes the honesty
becomes too much due to being so realistic, unlike some celebrity
autobiographies the lows are hidden with lots of positives but this doesn’t it
bears the truths to captivate hearts and minds alike. However one area of
critique which I have mentioned before, is RH’s logical writing style which was
evident in the shunt chapter, this area of the book felt more like a report of
the event than the chapter of the book, also appearing to bear lots of similarities
with the interview he did in January 2007 with Top Gear magazine. Nevertheless
fans alike will evidently see a man who is just family orientated, spending
lots of recovery period worrying about his daughters who at the time were very
young. Unfortunately haters of the presenter will obviously say it is just him
making some money out of an unfortunate event that happened, but if they were
to just pick up this book and read just Mindy’s chapters they would realise
that essentially this is making a topic that is quite literally unspoken aware
of, more spoken about and raising money for the charities that do help families
who have to deal with this.

Go and pick it up from your charity shop or the new shelf in WHSMITH titled ‘The Top Gear shelf’.