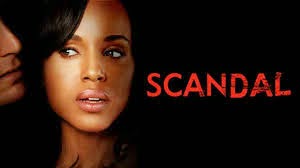 Whether you’re a TV addict like myself or not, there comes a time in ones life that we must all sit down and either binge watch or just watch a guilty pleasure, like Jeremy Kyle. Now, however we are surrounded constantly by television on demand which has resulted in us becoming TV binge eaters. If TV were food, I would be obese and needing a gastric band but thankfully it isn’t. On my last TV recommendation, I suggested that you should go and watch The Good Wife and others but now thanks to Amazons; “Prime Instant Video” I found Shonda Rhimes new drama, “Scandal”. Tonight on this sassy post, I will tell you why you will be creating a scandal by missing out on this show. 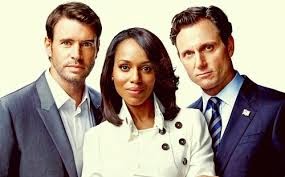 Greys Anatomy writer Shonda Rhimes has taken a new direction in her TV writing and swapped the OR to the White House in new TV hit Scandal, starring Kerry Washington and Tony Goldwyn, this political thriller series is one of a kind. The show originally aired in American station ABC like fellow Shonda shows such as GA. Set in Washington DC, the show follows former White House Communications Director to the President, Olivia Pope (Kerry Washington) who has left the White House to start her own firm, “Pope and Associates”. The firm dedicate their lives on fixing the public images of the nations elite but sadly Pope discovers that her past always comes to bite her. Like GA, the show doesn’t focus predominately on the star character but the other staff members in OPA including Harrison Wright (Columbus Short) the lawyer of the firm who brings his smooth talking manner to the table. Next we have Abby Whelan who is the firms private investigator, third in the staff room we have Huck (Guillermo Diaz) whose the hacker with a CIA past who becomes the dark horse of the characters. The newest recruit is Quinn Perkins (Katie Lowes), the fresh lawyer with a recent secret. All the characters share 1 important quality, Pope rescued them all when they were in their darkest moments therefore are incredibly loyal towards Pope.

Season 1, is like any other series where we get a quick introduction into all of the characters, in particular the President, Fitz (Goldwyn) and Cyrus Beene (Jeff Perry) who GA fans will recognise as Meredith Grey’s Father. However the main focus of this series is the relationship between the President and Pope, and the mystery surrounding Amanda Tanner (Liza Weil) in relation to her involvement with the White House. Season 1 of the thriller lasts for only 7 seasons before ending perhaps Rhimes was trialling it to see whether it would take off, it did and a second season was commissioned. GA fans alike, will also recognise the Vice President Kate Burton as Merideth Grey’s Mother in this drama, who plays a feisty, Christian desperate to become the first female President of the United States. Although at the end of the season you were a bit confused as to why there was only 7 episodes, we actually needed this, I liked to call this the Starter to a great series, I think future American dramas should follow suit with this format of only a few episodes in their first series just to give audiences a taste into what they can expect. It also leaves writers with alternative ideas for future seasons.

Season 2, follows a more traditional format with 22 episodes in it which is needed with there being so much happening. This series mainly focuses on the Scandal behind Fitz’s election, which we discover was rigged by all of his campaign management due to them knowing that he had no chance of presidency without them rigging it. In this season we also see an attempted assignation, a murder, a discovery and many cover ups. Season 2 also sees the first lady Mellie stepping up as a character, perhaps she is like the Bree VaVan De Kamp Desperate Housewives) of this show the dark horse in the first series which later develops into the amusing one.

Season 3, was renewed by ABC on May 10th of 2013 and then aired in the UK on new channel Sky Living. Following the role of Jake in Season 2, Scott Foley who plays this character was renewed to return as a regular in the new series. In addition to this Friends actress Lisa Kudrow was also signed. Unfortunately for fans, the series was shorter only containing 19 episodes as a result of Kerry WaWashington’sregnancy. This season focused on the discovery that was Pope’s Father, Eli was the command of B613 a secret spy organisation which had been the past of dark horse, Huck who we see more of in this season due to the majority of the series focusing on his past and how being a B613 agent changed him. A teaspoon of gossip which is unravelled is the mystery surrounding the disappearance of Popes Mother, who we’ve never met but has been spoke of as being “dead” but the question that is answered in this season, is, is she?

So there is a summary of each season to give you a quick taster. Now friends and family know by now that I loved Scandal watching the entire 3 seasons in a month which could be because of the amount of free time I have had. This show is so addictive that watching the first season in 1 sitting is possible, some parts I do have to close my eyes due to there being quite a bit of violence and torture scenes, so if you are not keen on gore than make sure you are prepared for these sections. One thing that I think Rhimes hasn’t quite gotten the hang of yet, is doing a re-cap of previous episodes, I could do with this, because if I give it a break I sometimes forget what’s actually happened in previous episodes. One thing I did like was the use of similar characters between Rhimes shows, using characters from GA in this show like the Grey clang. Another thing that has been praised is the use of diversity on this show, the fact that there is a gay marriage which is also shown on GA. Good Job Rhimes!

If you feel this is up your street, then you can catch all of the action on Sky, through their boxset opportunity; in preparation for the 10th January 2015 when, Sky Living broadcast the latest scandals.

I do hope that you go away and watch this, the first two series are available on Amazons Prime Instant video app and service, and have become available on Youtube. On Sky’s boxset service you can also binge watch them on that service too. So go and join OPA and don’t cause a Scandal watching this show!