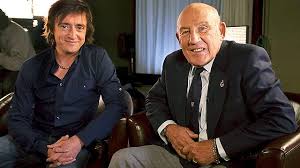 Are you currently having Top Gear withdrawal symptoms? Well I could be giving you some sort of compensation for the absence. *Evan why have you gone into sales girl mode?*

If you didn’t know by now, as well as Top Gear I a massive fan of the short one, Richard Hammond; as my family mock this, he does seem to pop up a lot in the year, aside from the Top Gear brand. I suppose that is a relief for him now, that his Top Gear bubble burst after his colleagues famous fracas. Today I want to point you in the direction of one of his shows that has unfortunately become at the bottom of the pile of his filmography, it was his interview with the racing driving legend Sir Stirling Moss. The interview he previously did with Evel Knievel was a roaring success, raking up the viewing figures and yet the interview he did with Moss so recently, seemed to not be as successfully rating due to being first aired on BBC Four, a channel that is often forgotten about despite being apart of the BBC clutch. I believe that it has been sort of dismissed in his uncatalogued of shows for 2 reasons. 1 being that it was not as promoted as other shows he has presented, I have a good strategy for catching promos for his shows, sadly there were none I saw much to my disappointment. The second reason I think is similar to the last one is, is that it was on BBC Four, a station that is sometimes forgotten as I mentioned it is a channel that airs much more intellectual shows unlike its fellow channel BBC Three. These two factors seriously impacted its success, also at the time of Hammonds interview with Evel Kenevil, Hammond was top property as it was only a year since his famous accident and I think a lot of people were interested in viewing his first show now recovered & it was aired shortly after the stunt man passed away. Such factors would clear contribute to ratings and remembering such a show.

The interview focuses around brain injury, a topic which both men share and have experienced. For both, their injuries were in the public eye; Moss his injuries left him without being able to work in his profession in racing driving, at the time he of his accident, Moss was the best British racing driver the country had. Whilst Hammond’s injury, left him with issues such as compulsion, depression and emotional problems for years afterwards unknown to the audiences of Top Gear and his various other works. I think what will strike a chord with most who watch this interview is, is how honest and open these two men are about their experiences, they don’t try to wash over it like it was just an experience, like tripping over a curb. Opening up about the guilt and troubles they dealt with months and years after their accidents. At one point Hammond discusses with Moss, the T-shirt scenario, what he’d have had written on a shirt to face the public, on one side he’d have ‘im fine thanks’ and on the other, he’d have ‘im still bloody poorly’. This is clearly a metaphor highlighting the public and private persona; for Moss however he’d have ‘im lost’. If I was a lot more in touch with my emotions, by this I mean crying at television, I would have cried but even with my steel like emotions, I did feel quite touched because Moss being apart of the culture where the male was the dominating figure, you’d expect him to say ‘id have a topless girl on it’. These feelings the pair felt during their recoveries open up the traumas that both suffered not only in the initial recovery periods but years on afterwards.

I particularly liked how there were contributions from other people, including Hammond’s wife who is now recognised as a magazine columnist not just the wife who stood by her husband whilst he was laying in a coma or quite confused. We also meet Moss’ PA at the time Val who details how she stood by her client through his battle and dealt with the British press around the time. Along the way, there are also some professionals who specialise in neurology and can make this show more appealing to the BBC four audience who would want some solid facts chucked in. These additional contributors I think deepen the interview, because without these it would be quite dry. I felt that Hammond’s wife Mindy, also came into her own, I have seen and heard her talk about her husbands injury but I felt seeing her on a screen for longer than 4 minutes really let her open up. I thought she did really well, perhaps we could have heard from his eldest daughter who is mentioned frequently as ‘missing her Daddy’ perhaps adding to the already poignant tone in the documentary.

For any viewer who was oblivious to Hammond’s accident, they also replay that, which you could clearly see was quite hard for him to re-watch having probably spent the last 10 years trying to avoid seeing it, who wouldn’t? Even Moss responds with ‘I dont know how you survived that’ which I think really struck Hammond. Moss however, his accident couldn’t be replayed for our viewing due to it not being recorded for telly but there are paparazzi shots of the accident, highlighting the popularity of the racing legends accident also revealing how at the time our press were like they are today, savages for a news story.

I believe that when a person speaks on the television about a problem or an issue let’s say, it is highly more engaging and effective than say writing it in a book or in a magazine interview. This is because we get the true tone of the person’s words. I particularly became shocked when Hammond revealed the guilt he felt after the accident, feeling especially guilty on the know that it may have been his fault, the accident. Clearly paranoia because, a driver cannot cause a tyre to burst? I have been driving 6 months and i know that or do I? If I’m wrong please don’t send hate mail. It was only through the telemetry on the car that proved his innocence in the accident. Although this helped him to confirm his gut feeling, he still felt guilty about the prospect of leaving his wife a widow with their 2 daughters. Moss however speaks of the feelings about leaving racing driving  as a result of his injury, from this it is clear that it has left him with a sense of emptiness. Both these feelings are emphasized by hearing the men speak of their issues; Although Hammond and Moss have spoken of such experiences, their words are either in a book or in magazine interviews that have been edited for selling purposes. However I should say that Hammond’s book On the Edge, bases its success on its honesty a feature that runs the whole way through from both him and his wife’s perspective.

There are some viewers and readers of this, you might be one who would watch this and say to the person sat next to them ‘Hammonds doing this to talk more about his crash, making money from it’ and yes you can say that; but at the end of the day whether you like it or not it is an experience that it is hardly forgettable. I’m sure if you or a friend had suffered a big experience, you’d be asked about it. I don’t think this interview would have worked if the interviewer had not have suffered a brain injury, because this interviews brilliance comes from the fact that both of their answers come from bouncing off one and another’s words. For me I can remember Hammond’s accident like it was yesterday and when he talks about it, I feel an enormous sense of relief that he manages to speak about it with such grace and honesty without being smug. Whether you like him or not, you cannot complain about this work, I think it is unlike his other works, he doesn’t behave like Clarkson’s hamster but as a presenter who is quite intelligent and can manage with such a legend that is Sir Stirling Moss.

If I was to be a school teacher, I would have to give you Hammond some even better ifs, I will say that he should try and use another word from ‘astonishing’ I have notiiced this from other shows of his, so please use a thesaurus. Similarly I would suggest that seeing as though this was produced under his own production company that it could have been promoted much better. Though these are niggles!

I’ll be completely honest, had Hammond not been presenting this, I would never have watched because as I have said on numerous occasions here on the cornerstone, I’d literally watch him present paint dry. A programme he could present round Pete’s(Dad) house as he is painting like there is no tomorrow. So Richard, give me a call, you might not smash viewing figures but id be there! I’d be lying if I said that Id watch this, if someone else was presenting, because I would clearly not. Anyone who knows me could vouch for me on that. I do believe though, that this interview clearly shows Hammond in an alternative presenting style, quite an intelligent style; I would not like to see him become the next Graham Norton or Lorraine Kelly because when he did try his hand at it, it didn’t exactly go well, no offence. I think however, if you are interested in your cars, Hammond or Moss or just in need of an interesting show to watch that raises awareness on a taboo issue.

Unfortunately this show was first aired in 2010, therefore is no longer available on Iplayer but thankfully for you it is available to watch online like most things are. If you are a tad afraid of streaming it online, it is available as a DVD copy too. I know though its hardly like owning Gone Girl on DVD but I don’t know your cup of tea for DVD collections.

If you have watched it, what did you think of it? Did you find it an interesting or watch? Or do you now want to watch it? Let me know in the comments below what you think! 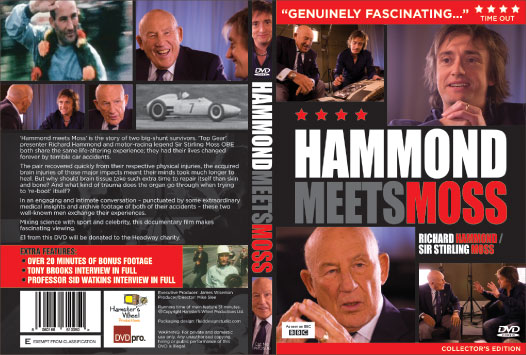